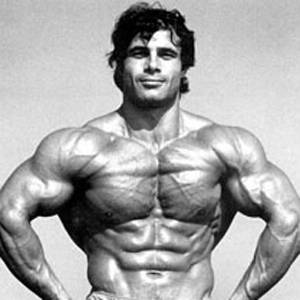 Eat like a Strongman. Dr. Franco Colombu, former Mr. Olympia winner and costar of the movie ‘Pumping Iron,’ on what really works!

Franco Columbu, former Mr. Olympia & Mr. Everything, says, “Hey, you, eat a bagel!” Back when he was considered one of the World’s Strongest Men, renowned bodybuilder Franco Columbu would bench press 520 pounds, dead lift 750, and squat 655. He bent a bar across his face in one contest, carried a refrigerator on his back in another, power-lifted a car, and blew into a hot water bottle ’til it exploded like a party balloon, spraying water all over the audience. He hasn’t carried a refrigerator in years, but his imprint on body culture is indelible. Today, at 54, Dr. Franco Columbu is a Los Angeles chiropractor, nutritionist, and trainer who has cowritten several health and fitness books, including Weight Training and Bodybuilding: A Complete Guide for Young Athletes (with Richard Tyler, D.C.); Franco Columbu’s Complete Book of Bodybuilding (with a foreword by Arnold Schwarzenegger); and The Bodybuilder’s Nutrition Book (with Lydia Fragomeni).

Most people will recognize Columbu as the muscleman posing next to Arnold Schwarzenegger in one of the greatest guy flicks ever, the 1977 documentary Pumping Iron. That body-fetish classic followed these guys through daily workout regimens that included five hours a day in the gym, ballet classes for posing techniques, and humongous mounds of ground beef and egg-and-tuna omelets. A lot of cholesterol went into the making of that film. Even now, it’s not uncommon for serious weight-training programs to include as much as 200 grams of protein per day, and nearly all of it from animal sources. As a key figure in the culture since the ’70s – (he won Mr. World, Mr. Universe, and Mr. Olympia titles) – Columbu has seen the 200-gram protein diet, as well as every other extreme food fad, come and go.

Mostly, he avoided all of it. “It didn’t come out in Pumping Iron, but Arnold and I never went on those diets,” he says. “We used to eat things in front of people and they ay, ‘You eat that?’” He didn’t do the high carb, he didn’t do the low carb, and he didn’t do the “food combining” diet, either. “Remember that one? Don’t eat protein with carbohydrates. Food combining was so bad; I thought, these people are really out to lunch. How do you separate protein from string beans, pasta, potatoes, and rice? All these foods are half carbohydrate, half protein.”

Then there was the egg-white craze. “I had guests come to my house, bodybuilders, Frank Zane, Arnold, all the guys from Pumping Iron. Arnold didn’t care about egg whites. Arnold said, ‘Give me the protein and let’s go to the gym.’ So I would separate the eggs because the other guys wanted the whites. We ended up drinking the yolks.” In the ’80s, a lot of bodybuilders switched to diets of water and meat. “Frank Zane and Lou Ferrigno, a lot of those guys believed in low carbohydrates. But we realized that some of these guys had very low energy as a result. So we went with our instincts, which was that you need protein for the body and the stored glycogen and stored fat in the body for energy. The brain needs carbohydrates.” Columbu and Schwarzenegger were roommates during that time. Backstage before a competition, Schwarzenegger would announce, “Franco, it’s time for pizza.” They did it for the energy and also to psyche the other guys out. Their grocery bills were huge. Columbu recalls, “Joe Weider paid us $80 a week each. We’d go to the market, and three days later all the money was gone. We’d work construction to make extra money.” Schwarzenegger, Columbu reveals, never ate a fad diet. But he was jealous of Columbu’s even less-exclusive menu. “I could eat sweets, and this would make him angry. He’d say, ‘Oh, you. You can make muscle if you eat wood.’”

Columbu received his degree from Cleveland Chiropractic College in 1978. He’s married and has a 10-year-old daughter, Maria. “Most of Maria’s friends are told, ‘Don’t eat this and don’t eat that.’ I say, ‘Eat the pasta.’ She eats everything. And she is in the best shape of all of her friends. What I’m saying is, to put a kid on a diet is devastating, in my opinion.” The two-time Mr. Olympia has become a respected expert in nutrition, sports medicine, and kinesiology. He does special training programs for sports injuries, and the list of celebrities who have sought his bodybuilding advice includes Sylvester Stallone, whom Columbu made sign a contract promising that he wouldn’t even swallow a vitamin pill without seeking Columbu’s approval first. But he doesn’t spend his whole life in the gym anymore. Columbu works out for maybe 20 minutes three times a week. He still sees Schwarzenegger all the time, but they gave up the constant training in favor of tennis. “I started playing tennis with Arnold in 1995, and we play on weekends. I mix up the sports … tennis, cycling. I like hiking.”

As to diet, he pretty much eats the same way he did when he was competing, except that he eats less (about 120 grams of protein per day). He recommends eating high-quality proteins. In order of importance, these are: eggs, fish, dairy, and meat (including poultry and pork). Eggs are the highest quality protein, he points out, and still the most important to any fitness program. He notes that most dietary guides are wrong when they say eggs cause cholesterol problems. In fact, egg yolks contain enough of the fat emulsifier lecithin to neutralize cholesterol in other foods. Columbu cites a study: “In a group of 100 people, the first group ate eggs. The second group drank only milk. The third drank milk and ate eggs. And people thought, that third group is really going to have high cholesterol. But the eggs lowered the cholesterol, even in the group drinking milk.” Much of Columbu’s information goes against conventional wisdom. “Let’s say you’re going to the gym at 3 p.m. Breakfast isn’t important. Bread and eggs is perfect. Lunch is when you eat a big meal with carbohydrates. Why? Because you can’t go to the gym without energy. But if you eat that for dinner and you don’t burn it, it will store as fat overnight.” He stresses eating smaller meals and more frequently and that high-protein diets require extra Vitamin B6. Also, check the labels for sulfur dioxide, prevalent on fruits and vegetables. “You can’t digest it, and it bloats your stomach. People say they can’t eat grapes. It’s not true. It’s the sulfites.” But the biggest tip for anyone who is looking for a flatter stomach and smaller waistline is that many folks on high-protein diets require hydrochloric acid and enzyme supplements. The body just doesn’t make enough on its own, especially past age 26.

It’s well known that they took steroids in the Pumping Iron days. Even Schwarzenegger has come clean about this. Fact is, they didn’t have the information back then about how dangerous the drugs are. But Columbu found that the negatives far outweighed the positives; you got big but you lost definition. And he notes that musclemen who kept using drugs eventually developed fat stomachs. He sees those symptoms in today’s bodybuilders, some of whom are so massive they make the Pumping Iron bunch seem small. Columbu sees a lot of fat stomachs, which indicates to him that drugs are rampant. He tells young athletes and bodybuilders to stay off the juice, including Human Growth Hormone (HGH). “Old people are trying to live longer, but young people want to win,” he explains. “Even if you tell them that they are taking something that is killing them. But … the minute you start taking these drugs, your workout stops. You will be depending on that instead of going to the gym. Once you switch your mind to depend on a secret like steroids, winning is over.”

P-II Actualize Your Muscular Potential In One Year! By Mike Mentzer

Is Working Out Fun? by Scott Lawrence

In theory, holidays are a time of joy and celebration. In practice, even the most superficial attent…

Contest prep is a tricky beast. (Check out Men’s Physique Posing suits.)  Everything needs to …