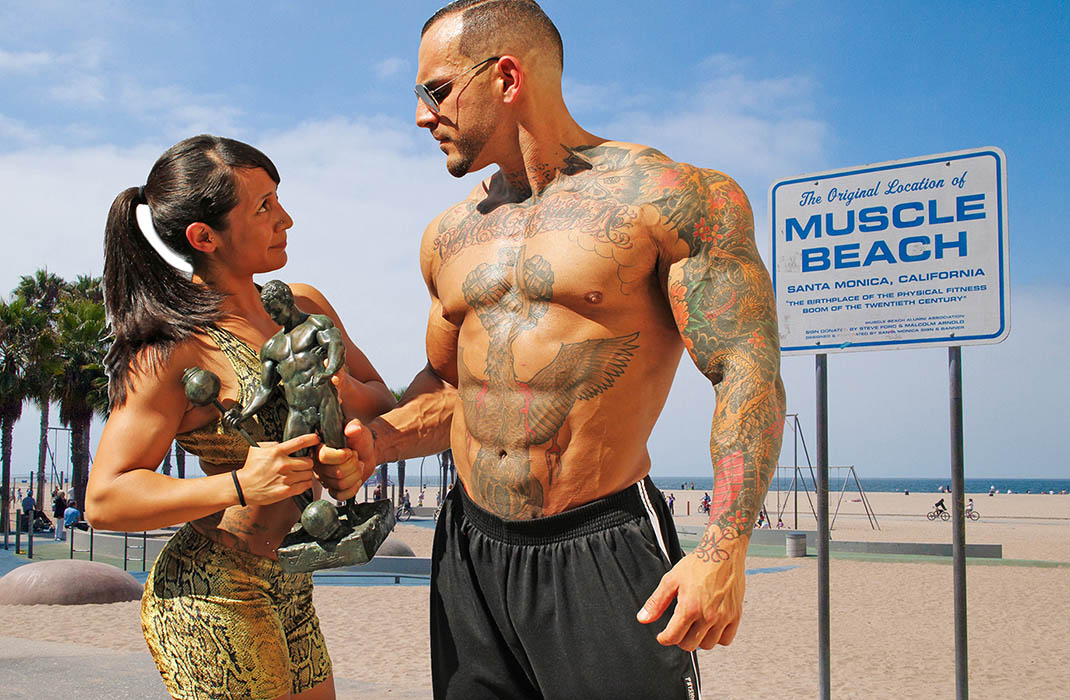 The History Behind The Mr. Olympia Sandow Trophy. Physique Bodyware’s Sandow Trophy Has Been Seen In Movies & On TV And Is Available To Rent: For Movies, TV, And Special Events.

Former competitive bodybuilder and CEO of Physique Bodyware, Wayne Genovese was fortunate enough to acquire the Holy Grail and most coveted of all prizes in the sport of bodybuilding ever, the Sandow trophy. Close friend and business associate George Helmer, president and CEO of the Steve Reeves International Society, has authenticated this verdigris patina bronze work of art as the original IFBB Mr. Olympia trophy version. George actually compared our Sandow trophy to the original Sandow won by bodybuilding legend Steve Reeves at the 1950 Mr. Universe contest where he beat Reg Park and gave us the nod, it is an original Sandow Trophy. With so many fakes and copies around today it is truly a thrill to own such a huge piece of bodybuilding history!

September 18, 1965. The crowd at the Brooklyn Academy of Music waited at the edge of their seats, screaming in anticipation. They clapped their hands, stomped their feet and yelled as loud as their lungs would allow for the blond superstar from California with arms too big to believe. The man they were waiting for was the legendary Larry Scott, and the reason why they were waiting was because this was the night of Joe Weider’s greatest creation. This was the night of the first ever Mr. Olympia contest. The prize, a cardboard felt covered “jewel”-encrusted crown, no money. The Sandow Trophy came much later on.

Where Did Physique Bodyware Got Their Sandow Trophy?
The seller, an old time Hollywood actor and TV executive in Burbank, CA acquired this Sandow many years ago from a well known IFBB pro bodybuilder down on his luck back in the 80’s, maybe even an Olympia winner? Sworn to secrecy, this bodybuilder’s identity still remains anonymous ’till this day, which only adds more mystery and intrigue to this legendary work of art and bodybuilding icon. But who could have been so down & out back in the day that he’d part with such a prize? Was it Frank Zane? Was it Franco Columbo? Maybe it was Chris Dickerson, Samir Bannout or Lee Haney? Arnold didn’t need the money, he had all that Conan and Terminator cash! Who really knows for sure.

The Artist
The son of an artist, Frederick W. Pomeroy was born on Oct. 9, 1856 in London. Known for his talent and skilled eye in nude portrait work both male and female it was clear to see why he was chosen to create this masterful bronze statue.

The Man! The Legend!
Eugene Sandow was born Frederich Wilhelm Mueller on April 2, 1867 in Prussia, now Germany and spent most of his years in London. Little did he know that he would pave the way to today’s fitness revolution and become the first modern bodybuilder to get paid for flexing his muscles and as a personal trainer. Sandow’s life style was like a modern day rock star on tour going country to country as a featured headliner and entertainer as a music hall strong man even rivaling the great magician Harry Houdini. On Sept. 14 1901, now a successful gym owner and physical culture entrepreneur Sandow promoted the first ever bodybuilding contest known as “The Great Competition”. Out of twelve contestants the field was narrowed down to just three winners of a statuette of Sandow himself. First prize, was a gold statue won by William L. Murray. This statue was never found and the story goes it was either melted down or destroyed during WW II in London. Second prize was silver and bronze was for third place. Sandow authorized several different copies of the statue; they were either given to friends and admirers or sold, while others were displayed in Sandow’s gymnasiums to help promote physical culture. Most of these statues were destroyed, damaged or lost over time. In 1925 Sandow passed away at his home in London. The unusual circumstances that surround his death still remain a mystery.

It’s Show Time
The 1950 Mr. Universe contest was held in London and it was time for the Sandow to make its long overdo debut. The original third place bronze statue from “ The Great Competition” would be the first prize trophy given out this night. English muscleman, Reg Park was the favorite to win that night. What a great relief to know that the Sandow awarded fifty years earlier would never leave the motherland; they were wrong! American superstar Steve Reeves defeated Park in a huge upset that brought the Sandow to the US where it wouldn’t be used as a contest prize trophy again until 1977. This actually sucked for Arnold, he retired by then and finally won his in 1980 when he made his controversial comeback and won the show.

t and a lifestyle that changed the world and its people.

Physique Bodyware salutes Eugene Sandow for his many great feats and accomplishments that started the physical culture revolution that paved the way for legends like Steve Reeves, Reg Park and Arnold plus all those who follow.

SIDE NOTE: During  1979-1980 Joe Weider did have ads in Muscle & Fitness offering Sandow Trophies for sale at $1000.00 ea. They were the same Sandow Trophy given to the Mr. Olympia winners since a few Extra Copies were made each year and floating around Joe’s  Woodland Hills office!  Our Sandow trophy has been featured in movies, TV and magazine ads and is available for rent. Ask us how, serious inquires only via email.

Heavy vs Light Well here we are again, another month gone and all I could think about is the questio…

1. What are probiotic organisms and prebiotics and why do you add them to your protein powders? Answ…

Spice Pumpkin Protein Mousse. Embrace the flavor of the season with a dessert that’s filled wi…