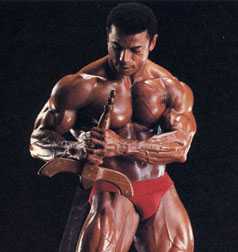 Bodybuilder Chris Dickerson made a huge impact on my both my personal life & professional career. It all started back in 1982, Gold’s Gym Venice California. It was like a dream training at Gold’s! This was the place I only read about through the pages of Joe Weider’s Muscle Builder magazine. This was the mythical place where the Iron Gods trained for battle everyday, day in and day out. This was the place where legends like Arnold, Zane, Franco, Draper, Corney, Dickerson, Grant and Padilla grunted out set after set, rep after gut busting rep to become the best physique stars during the Golden Age of bodybuilding.

Let’s not forget about Pumping Iron the movie. And here I was smack dab in the middle of it all! I had finally made it, I was standing smack in the middle of the “Mecca Of Bodybuilding”, I had arrived, so I thought! Suddenly, I heard a voice that pulled my head out of the clouds and brought me back to earth. “Hey you, the kid with the legs that’ll be $10 bucks for the day!” It was the voice of Zeus himself, Mr. Joe Gold! I replied “cool Joe Gold, here’s $20 bucks I’ll be back tomorrow!” I was in! The place was full of energy! Every time the front door opened, you could smell the sweet ocean air. Huge pictures of ALL of the best Physiques ever were hung across the walls. All around you could hear the sound of heavy weights clanging rep after rep above the blasting tunes of “Rock This Town,” by the Stray Cats coming from the radio. I wasted no time scoping around for Arnold, Big Louie, Bill Grant, Ed Corney and Frank Zane. As I looked around, I started to see movie stars and pro bodybuilders all over the place way too many to name.  They were just like regular guy’s working out in the gym, all training side by side without saying more than a few words between sets. Even a few pro guy’s came over to me and asked how did I develop my huge calves & thighs.  I was taken aback at first, imagine pro bodybuilders, in Gold’s Gym, asking me for training advises. It was Awesome!

Now, back in the day they had these twin brothers known as the “Barbarian Brothers”, Peter & Paul, they were NUTS! They would slap each other around in the middle of the gym floor trying to outdo each other. It was like watching that scene from the movie Raging Bull when Joe Pesci keeps punching Robert DeNiro, “wrap it around your hand Joey”.   These guys even had their own custom-made, bigger than life calf raise machine, shoulder press plus a few other equipment tourist attractions set-up in Gold’s when you first walked in. Just for kicks I loaded the “Barbarians” calf raise machine to the max, plus had a guy stand on the stack while I did calf raises. Everybody went INSANE! I only weighed about 230 lbs and here I was doing raises with over 1000 pounds! That was highlight of my year so I thought until I met 1982 Mr. Olympia winner, Chris Dickerson.

Chris had an office upstairs in Gold’s Gym from 1979 ‘till 1983.  Around the same year 1982  he had won the Mr. Olympia title at the age of 42. This was unheard of back in the day since most of the iron-heads competing were in their mid 20’s. Chris was living large in a nice loft in Venice CA, he had a private secretary and sold his own line of lifting gloves, grips, tee shirts and more, he was making great money. Chris was also the first personal trainer Gold’s Gym ever had. Imagine doing a set of dumbbell flyes and suddenly hearing a deep voice say “would you like some help with those?” You look up and it’s Mr. Olympia!  It was mind blowing at the time.  Those were the days! Today’s pro guy’s wouldn’t even tell you if you were doing an exercise wrong and asking them for advise, forget about it! Today bodybuilding has become very  individual, it isn’t fun, there’s no camaraderie. It’s lost that brother in iron mentality. But I digress.  After my workout I went upstairs  and walked into Chris’s office, sitting behind his desk, on the phone was Mr. Olympia.  Chris waived me in and signaled for me to close the door.

Sitting there I realized, here I am in Gold’s Gym Venice, waiting for Mr. Olympia to get off the phone, how cool is this for a teenager from New York.  I thought this could be the start of my professional bodybuilding career! Chris finished up his phone call, stood up from behind the desk and introduced himself. We hit it off instantly. We spoke about my diet, supplements and my Tom Platz legs. The first thing Chris told me was that I needed to cut out dairy! This was a hard for me to swallow since I was drinking a gallon of milk a day and liked it in those days! And as for eggs, I was eating 3 dozen just for breakfast, suddenly they were gone too! He went on; explaining that eating a well balanced diet in smaller portions is best and that adding another meal would help me get ripped! We talked for about an hour about everything from training to dieting and everything in-between. I’ll never forget that day! Well, after receiving my diet and training advises from the best bodybuilder on the planet, I couldn’t wait to get back to NY and try it out!

Training back in New York, months later I realized that while I enjoyed working out, getting big and picking up chicks the dieting part of becoming a pro bodybuilder sucked! I enjoyed my food way too much, I still do!  That’s why a few years later, it came time for me to make a decision that would decide my fate and my future, in that one defining moment I thought to myself “Geez my workout pants don’t fit so well, I can’t stand wearing these stupid clown pants and these baggy sweatshirts any more!  I look like a fat slob! If only my shirts were V-Tapered and my pants weren’t so baggy, I’d look much better and bigger, I thought to myself.  I’m gonna start my own line of Bodybuilding & Workout Clothes!” Physique Bodyware was born!

Today, many years have passed since my first meeting with Chris Dickerson and now we’re friends. We speak to each other a few times a year and he still fondly remembers that “Awesome” day in Gold’s Gym just as much as I do. Here’s what Chris is up to these days. About 3 years ago Chris Dickerson moved from New York City to Wilton Manors Florida to retire where he’s still a NY Yankees fan. You figure a guy 67 years young would enjoy staying home watching day time TV and reading the newspaper, not Chris. He’s still an early riser and he’s busier than ever as a personal trainer working out with an older more mature client list of baby boomers looking to live longer and healthier life styles. He gives them the same advises he have me back in 1982, “eat a well balanced diet of fish, chicken and turkey.

Lay off dairy and stay away from the salt.” According to Chris a Glass of Vino is good for you, in moderation. He even quotes his mentor Bill Pearl “ If it swims or fly’s it’s good for you!” Chris still enjoys his passion for singing Italian & German Opera. He now travels around the country giving lectures, singing and as Master Of Ceremonies. Chris has a successful website loaded with great autographed photos, training information and is currently working on his autobiography to be released later this year. Thank you my friend for taking the time to help a kid live his dream.

Four-time Mr. Olympia champion, Jay Cutler, is undoubtedly one of the most recognized bodybuilders o…

Is working out fun? Sounds like a rather irrelevant topic of conversation at face value. But is this…